Boxing | How To Safely Throw Punches

Boxing fitness classes are a great way to tone up and get your cardio fix. Though if you're imagining knocking ten shades out of your opponent, our boxing classes aren't about that. Our Boxercise, BoxFit and combat classes are no-contact, so you'll get all the benefits of a boxing workout, without the risk of a black eye!

If you're new to boxing, we take a look at how to safely perform a few of the moves you'll get to grips with in your fitness class.

Before you punch, your thumb needs to be on the outside of your fist, between your first and second knuckles on your index and middle finger.

If your thumb is on the inside, as you make contact with the pad you're hitting, you're likely to break your thumb! Ensure your thumb is tucked below your curled fingers, to be out of the way of the impact.

If you’re a right handed, your left shoulder should always facing your opponent (and vice versa). Stand with legs shoulder-width apart, knees slightly bent, left foot turned towards your opponent. Make loose fists, and hold your right hand by your chin, left hand down in front of your face. Chin down, eyes up. From starting position, punch with your left hand, twisting your hand so that your knuckles are up, palm down, when you connect.

Snap the movement at the end, and bring the arm back into the starting position to protect your face. Take a small step forward with your right foot as you jab, and pivot on the ball of your left food. Connect with the first two knuckles.

From starting position, keep your front foot grounded and pivot on the back foot, turning your torso toward your opponent. As you punch, twist your hand again like you did with the Jab (knuckles up, palm down).

After you connect, snap your arm back to your chin quickly to protect your face.

Assume your starting stance. Lift your left arm up to nose height so it forms a right angle in front of you. In the same motion, pivot your feet and turn your torso, which will put force behind your hook and move your punching motion to the right.

Don’t wind up the arm. You should be using the power in your legs and body to throw the hook.

Start in boxer’s stance. Bend your knees slightly, and turn just a tad toward your opponent. With your dominant hand, punch straight up from the chin.

Use your knee bend to put some power behind it, and just drive straight up. Make sure to keep the left hand in place. The secret in boxing is that the hand you’re not using is protecting your face, at all times.

The side elbow is the most simple of all the elbows & the safest to use in a class situation. This move is from the Muay Thai discipline.

It follows a horizontal path, slicing from the side.  The side elbow is thrown by tucking the hand in at the chest and turning the hips to gain velocity in the strike.  You are aiming the point of the elbow at the side of the face or chin.

To land a straight knee on your opponent, you will need to utilize your hips while leaning back to generate the forward momentum. The goal of the forward knee is to drive your knee straight through your opponent’s abdomen.

Pretend that the end of your knee is a spearhead and you are trying to shove that spear as deep as possible into your opponent as you can. By pushing your hips forward and leaning your upper body back, you can generate more momentum behind the strike. To maximise the velocity and impact you can hold your opponent in a clinch.

Take a 45-degree step with the non-kicking leg. Open up the hips. Bring the knee up and across the desired target. Turn the hips over. Extend the leg. Follow through and strike with the shin around 2 inches above the knee.

A Sprawl is a defensive MMA move, it is used in response to a takedown attempt, where the competitor jumps back, drops their hips, and drives their weight into the opponent who is attempting to take him down. It is reminiscent of a burpee but is perfomed explosively with speed. 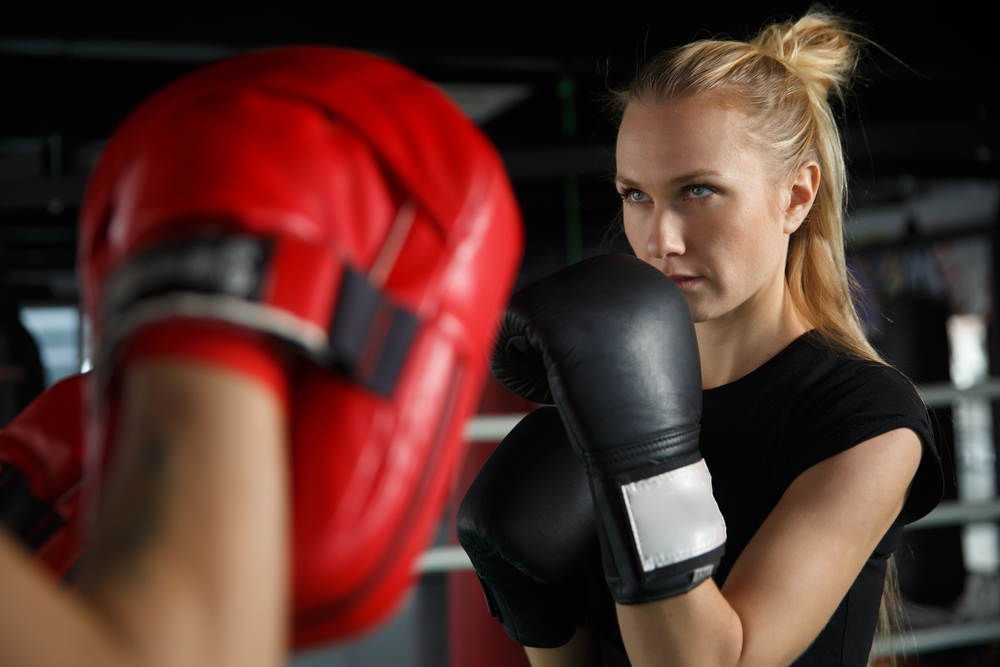 How To Safely Hold Focus Mitts

Keep them tight: You want your partner to practice throwing punches to the body and head of an actual opponent, so keep the mitts close to your own head and body. Begin by holding the mitts in front of your face, turned slightly inward, about six inches apart from one another. Your elbows should remain against your body as you’re catching most punches.

Give correct mitt position: Straight punches, like jabs and crosses, should land while the mitts are facing forward. Hooks and uppercuts, though, require that you turn the mitts appropriately. For hooks “to the head,” turn the palm of the mitt inward in front of your face. For hooks “to the body,” place your hand just above your hip with the palm facing outward. For uppercuts, turn your palm downward. Uppercuts often require you to lift your elbows slightly off your body.

Be in command: You are in control as the holder. You and your partner should assign numbers to punches and/or combinations so that the holder can call out a number and the puncher can land the appropriate blow. By controlling the shots, you also give yourself time to brace for each incoming punch.

Move around: Rarely in a match do fighters stand flatfooted. You stick, move, avoid punches, and stick again. Mimic a potential opponent by moving around between combinations. Also, don’t be afraid to throw a punch of your own. Your partner should hone both his offensive and defensive techniques.

Ready to get started? Book one of our boxing-inspired classes online! Don't miss our brand new boxing class, Fighting Fit!