The crunch and the plank are the two most popular core training moves, but do they produce the same results? We put them to the test.

The crunch is a dynamic movement. It’s a spinal flexion – a forward bend of the spine.

The plank is a static hold. An isometric contraction of the muscles of the spine.

Which muscles do you work?

Both the crunch and the plank engage the rectus abdominis and the obliques. However, the plank also targets the erector spinae, the glutes, hip flexors, quads and deltoids.

Why we love these moves

In 2013 the Les Mills research team explored which type of abdominal exercise – isolation or integration – provokes the greater muscle activation. This study highlighted:

THE VERDICT: The plank takes the crown

While the humble crunch can work wonders for your core, the plank provides optimal results when it comes to aiding sports performance, rehab and general fitness. So, if you really want to maximize the benefits of your core training the increased muscle activation you get with a plank means it’s the way to go.

When to choose crunches over the plank

If you have weak wrists or shoulders choosing to challenge your core with crunches may be the best bet.

Technique tips: what to watch out for

Now, it’s the Plank Vs the Hover

As we mentioned when it comes to shaping strong abs, the plank is the way to go but we’ve got another debate, out of the plank and hover, which one works your abs best?

A little background on why hovers and planks are awesome

A few years back Dr Jinger Gottschall and the team at Penn State University compared the muscle activation of a collection of common abdominal exercises. This study highlighted how your core muscles work a lot harder in the hover or plank position than they do during isolated exercises such as crunches or oblique twists. This increased muscle activation is because integrated core exercises use the upper body, the lower body and all the core muscles in between – that’s a lot of abdominal work!

These exercises also train your core muscles the way they are needed most often. How often do you sit up from a lying position? Throwing, walking, climbing stairs … they all require the coordinated action of your core muscles with your arms and legs, so, training them in this manner makes a lot of sense.

Hovers and planks are also great for building strength endurance, which is important because of how the postural muscles of our core work – they don’t work in short hard bursts, where they hold you up for a short time and then collapse, they work consistently during a lot of our daily activities – so endurance is key.

So, what’s the difference between a hover and planks?

In a hover, you are resting on your elbows, and with your trunk relatively parallel to the ground, the lever (formed by your trunk and legs) is lengthened out. Your abdominal muscles are working to support a larger area of the trunk and gravity is pulling a longer lever down to the floor. 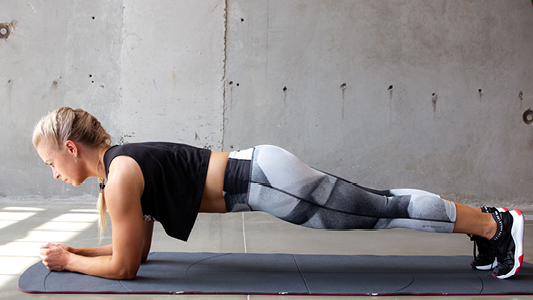 Planks on the other hand, are slightly easier. You’re up on your hands, so your trunk is angled upwards. This makes the lever slightly shorter, and as a result there is less pressure on the abdominals.

What’s best for your core?

While both the hover and the plank are great integrated exercises, recent EMG tests by Dr Jinger Gottschall show that the hover provides increased activation of the core muscles; the rectus abdominis, external oblique, erector spinae and the glute max.

It’s the hover that provides superior activation of the core muscles.

How To Perfect The Hover

The most important part of setting up a hover, or a plank, is getting spinal neutral and then locking on the muscles of the core so you have a bracing mechanism that keeps your back stable and stops your mid-section from sagging.

This is what you need to remember:

TOP TIP: You should feel the load in your core. If you start to feel it more in your lower back, drop to your knees.

How long should you hold a hover?

It all depends on the individual. If you’re just starting out, begin on your knees rather than your toes, hold the hover on your knees for ten seconds, have a rest and then repeat 6-8 times.

Once you can complete 10-15 reps with good form, the next step is to lift from your knees and come into a full hover for ten seconds, drop down to your knees to rest and then repeat 6-8 times. You will build endurance by gradually increasing the time you spend in full hover position. Working towards holding a full hover, with a neutral spine and knees off the floor, for two minutes is ideal. If you can manage two minutes you’re doing pretty well and obviously have good postural control.

Of course you can always improve! George Hood is a 60-year-old who recently set a new world record for the longest hover – spending a massive 10 hours, 10 minutes and 10 seconds in a hover position.

Increasing the time you hold a hover isn’t the only way to improve your core strength. One of the easiest ways to increase the intensity is to simply focus on pulling your elbows towards your knees or feet while you maintain your hover. This engages the lats (which are the muscles that run down the side of the body) and stimulate our core stabilizers to work even harder.

You can also up the intensity by using your feet and your hands as levers. The objective of these types of exercises is to take away some of the support but keep everything exactly where it was – so the stabilizers have to work really hard.

Choose a CXWORX workout and you’ll have plenty of opportunity to practice your hovers. Planks and hovers also feature regularly in BODYPUMP, LES MILLS GRIT and many more LES MILLS workouts.